Refining NZ (RNZ) and Fortescue Future Industries (FFI) have today signed a Memorandum of Understanding (MOU) to study the feasibility of production, storage, distribution, and export of industrial-scale green hydrogen from Marsden Point.

Refining NZ (RNZ) and Fortescue Future Industries (FFI) have today signed a Memorandum of Understanding (MOU) to study the feasibility of production, storage, distribution, and export of industrial-scale green hydrogen from Marsden Point.

The MOU with FFI is part of the ongoing work already signalled by Refining NZ on identifying repurposing opportunities for Marsden Point, once refining operations cease and Refining NZ makes its transition to Channel Infrastructure in April 2022. Work on the study will begin early in 2022.

“Channel Infrastructure’s vision is to be New Zealand’s leading independent fuel infrastructure company, and that means investigating potential opportunities in addition to our core business of operating the fuel import terminal. The potential of green hydrogen to support New Zealand’s energy transition is huge, so we are delighted that FFI has chosen to partner with us to investigate what might be possible in years to come.”

The study, which will be undertaken in phases will investigate whether green hydrogen production could be commercially and technically feasible at our Marsden Point site in the future.

“We are passionate about keeping Aotearoa moving today and, as our energy needs as a nation change, we will continue to investigate how Channel Infrastructure can play a role in meeting the needs of tomorrow’s fuel and energy markets, by utilising the capabilities of our site.

As confirmed in late-November, Refining NZ will transition to an import-only fuel terminal next year. In addition to the shared fuel terminal facilities, the company has announced agreements to provide dedicated private storage to customers. We look forward to providing updates as other site repurposing opportunities are identified in the future.

The company is today focused on the ongoing operation of our refinery over the next four-months and managing the safe shutdown and decommissioning of refinery assets as we make our transition. We are also working hard to support our people impacted by the changes to use the time between now, and when we transition, to find new jobs, or training opportunities – so they are ready to move to new jobs, when we become Channel Infrastructure.

Channel Infrastructure’s vision is to be New Zealand’s leading independent fuel infrastructure company. The Company will utilise the deep-water harbour and jetty infrastructure at Marsden Point to receive, store and distribute imported refined fuel, which is owned by its customers. This will replace the crude oil that our customers import today for refining.

Fuel will be stored at the Marsden Point site in existing tanks at the largest fuel terminal in New Zealand, with 180 million litres of shared capacity, as well as capacity to provide additional storage. Channel Infrastructure will continue quality fuel testing services both at the Marsden Point site and around New Zealand, through its subsidiary, Independent Petroleum Laboratories (IPL).

Fuel from Marsden Point will be distributed on behalf of Channel Infrastructure’s customers primarily to the Auckland and Northland markets, which make up around 40% of New Zealand’s fuel demand, through the 170-kilometre Refinery to Auckland Pipeline (the RAP) and the truck loading facility (the TLF) located adjacent to the Marsden Point site.

Conversion to an import terminal will reduce the Company’s direct CO2 emissions by almost one million tonnes per annum, delivering around a third of the Government’s first Emissions Reduction Budget1. The RAP continues to provide the lowest carbon emissions option for delivering fuel to New Zealand’s largest market – Auckland.

Refining NZ has been the country’s only oil refinery since it was established in 1961. In response to a significant decline in refining margins as a result of excess refining capacity in the Asian region, Refining NZ initiated a strategic review of the business in April 2020, to determine the optimal future business model and capital structure for the Company’s future. This review included extensive engagement with a range of stakeholders including customers and the Government regarding potential options for ongoing refinery operations and the potential conversion to import terminal operations.

1 Reference: Transitioning to a low-emissions and climate-resilient future: emissions reduction plan discussion document (https://environment.govt.nz/publications/emissions-reduction-plan-discussion-document/). The Company’s emissions are expected to reduce by c. 3.5MT over the 2022 -2025 budget period. 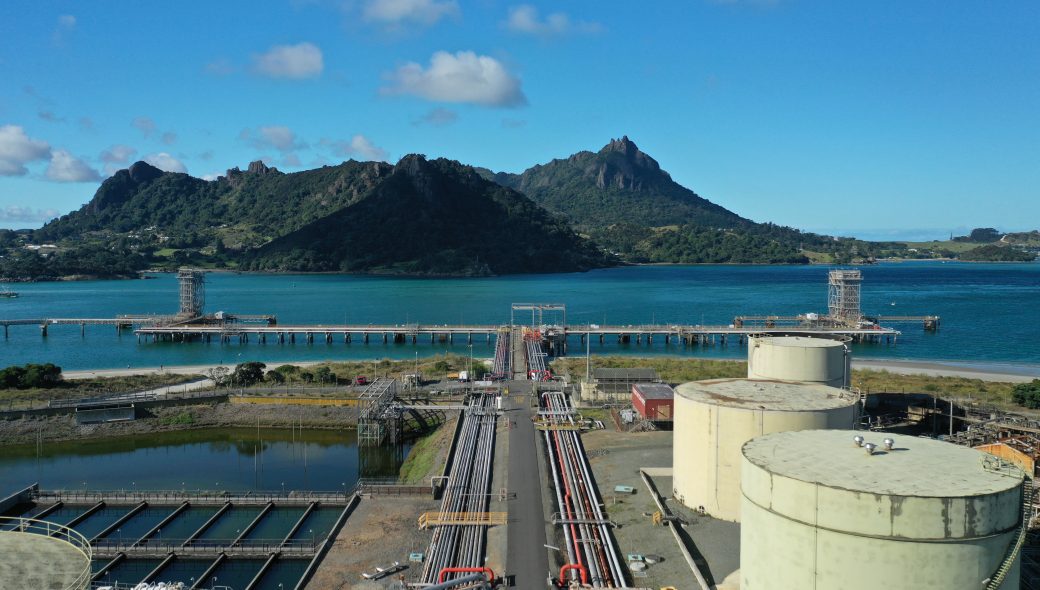